Hydropower Projects on the Salween River: An Update (3)

Hat Gyi Dam
The Hat Gyi Dam is located in Karen State about 47 kilometers from the Thailand-Burma border. The project is being jointly developed by EGAT International Co and China’s Sinohydro Corporation. With an installed capacity of 1,360 MW, the project is estimated to cost US$2.6 billion. The project has been met with opposition from local people on both sides of the border, particularly among villagers in Thailand from the districts of Mae Sariang and Sob Moei, in Mae Hong Son Province. They are concerned about the cross border impacts on the local ecology and fisheries, and the inundation of residential areas and farmlands along the Salween River.

According to reports by various local human rights groups, the project site of the Hat Gyi Dam and adjacent area has been used as a battlefield. A large number of local people have deserted the area and run away from serious human rights violations committed by the Burma Army troops and their allied militia, including military conscription, and rape.

In Thailand, the Office of the Prime Minister set up a subcommittee to study and monitor human rights impacts of the project in 2009. Public hearings were conducted in 2011. At a public hearing in Sob Moei District, Mae Hong Son, a number of affected villagers expressed their fears about the impacts of the dam in terms of the ecology, livelihoods and security of villagers in Burma, but no conclusions were reached during the public hearings.

The subcommittee submitted a set of recommendations to the government, including a proposed study of trans-boundary impacts covering villages in Thailand. Later, EGAT International commissioned Chula Unisearch to conduct an additional EIA of the Hat Gyi Dam along the Thailand-Burma border. According to the December 2013 version of the report, it was estimated that there would only be one family to suffer severe impacts (as the house is located at 48-57 meters above mean sea level in Ban Mae Sam Lab, Sobmoei District, MHS). The rest of the houses would only be minimally impacted.

EGAT and Chula Unisearch organized a small group meeting in Mae Sariang in late December 2013. But local villagers have submitted a letter opposing the study since it did not involve affected people and the classification of household risks is unacceptable since it does not take into account the impact on natural resources.

In the past several years, EGAT has continued to push the Hat Gyi project forward. It was reported that several attempts were made to approach the leaders of the Karen National Union (KNU) during 2012-2013. Villagers in Sobmoei district reported that the EGAT committee and a Chinese survey team have conducted research at the confluence where the project is to be built among residents in Sob Moei-Ban Mae Sam Laeb-Ban Tha Ta Fang. Local people were gravely
worried since there was no attempt to approach the community prior to holding the hearing, even though the Office of the Prime Minister had made such a recommendation.

The attempts to develop large scale dam projects in Karen State have hampered peace negotiations between the KNU and the government. Despite the peace negotiations, there has been increased militarization by the Burma Army around the dam sites and the concerns of local communities about the impacts of the dams have been ignored. The rising tensions have made many people question the Burmese government’s sincerity in the peace process.

Previously, KNU had called for a suspension of the Hat Gyi Dam project until there is a political settlement to the conflict in Burma. However, owing to pressure from the Chinese corporations and EGAT, KNU had to concede to the demand to conduct the survey of the dam site.

At present, the Burma Army is continuing to build up its military presence around the Hat Gyi Dam, both on the west and east of the river, amassing about eight battalions. 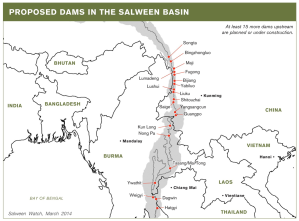